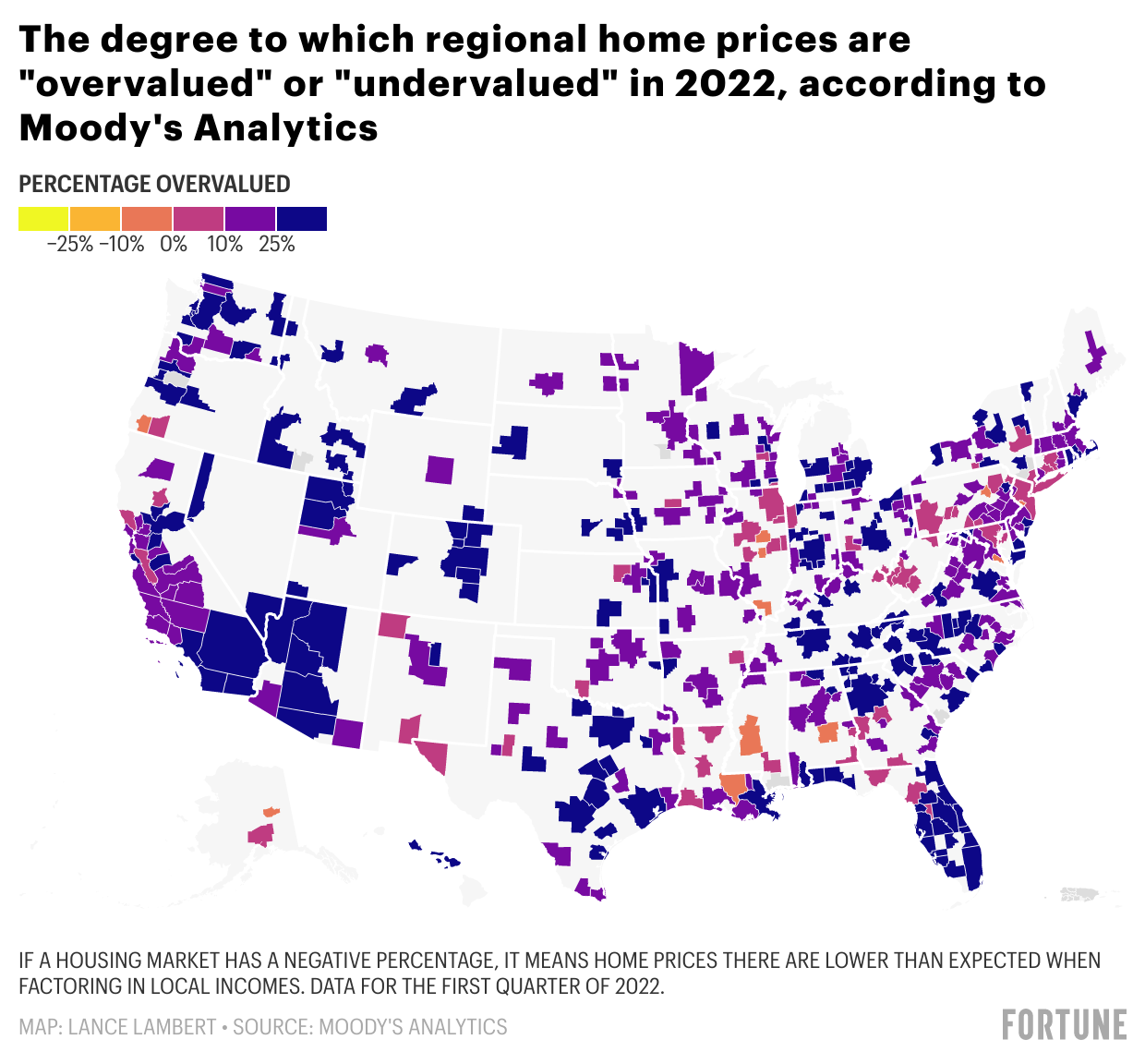 Back in May, Moody’s Analytics chief economist Mark Zandi came to Fortune with a bold proclamation: The U.S. housing market was entering into a “housing correction.” Through the summer, Zandi said, U.S. housing activity would plummet. As it did, Zandi said home prices in bubbly markets like Phoenix and Boise would begin falling.

At the time, Zandi’s prediction was dismissed by many in the real estate industry. Housing bulls thought that tight supply and favorable millennial first-time homebuyer demographics would continue to propel the Pandemic Housing Boom forward despite spiked mortgage rates. They were wrong, and Zandi was right: This summer, housing activity contracted sharply across the board while bubbly markets, like Boise and Las Vegas, have already started to see price cuts.

Historically speaking, nominal home price declines are rare—but they do happen on occasion. It occurred briefly in the early ’80s—after spiked interest rates pushed the economy into a recession—and then again in the early ’90s. However, double-digit home price declines are rare. Only the Great Depression and the Great Recession have seen price cuts of that magnitude. The fact an esteemed macroeconomist like Zandi raises the possibility of a -10% home price dip is, well, eyebrow raising.

Every quarter, Moody’s Analytics assesses whether local economic fundamentals, including local income levels, can support local house prices. At the latest reading, Moody’s Analytics finds 183 of the nation’s 413 largest regional housing markets are “overvalued” by more than 25%. That includes markets like Boise (“overvalued” by 72%), Charlotte (“overvalued by 66%), and Austin (“overvalued by 61%). The vast majority of these significantly “overvalued” markets are concentrated in boomtowns in the Mountain West and Sunbelt that benefited the pandemic’s work-from-home boom.

Simply being “overvalued” doesn’t guarantee that home prices will decline, however, it does matter. Historically speaking, when a housing market “rolls over”, it’s significantly “overvalued” markets that are at the highest risk of price declines. That’s the case now, Zandi says. Heading forward, Moody’s Analytics expects the 183 markets “overvalued” by more than 25% (see the full list in the map above) to see home prices decline by -10% to -15%. That’s assuming a recession doesn’t manifest. If a recession hits, Moody’s Analytics expects those 183 significantly “overvalued” regional housing markets to decline by -15% to -20%.

That’s a sizable downgrade. Back in June, Moody’s Analytics predicted significantly “overvalued” markets would decline by -5% to -10%.

Not every forecaster has turned bearish. Over the coming year, the Mortgage Bankers Association, Fannie Mae, Freddie Mac, CoreLogic, and Zillow all predict a low single-digit rise in home prices.

It’s pretty straightforward: As long as mortgage rates remain elevated, housing transactions (i.e. home sales) will remain sluggish. Home prices are a different story. While homebuilders and investors might be more inclined to cut prices, average joe sellers will resist doing so. There’s an emotional element: Sellers don’t want to give up on the number in their head. Not to mention, a solid job market means sellers aren’t desperate. All of that seller hesitancy, coupled with uncertainty surrounding inflation and the broader economy, explains why so many forecasters remain split on the trajectory for home prices.