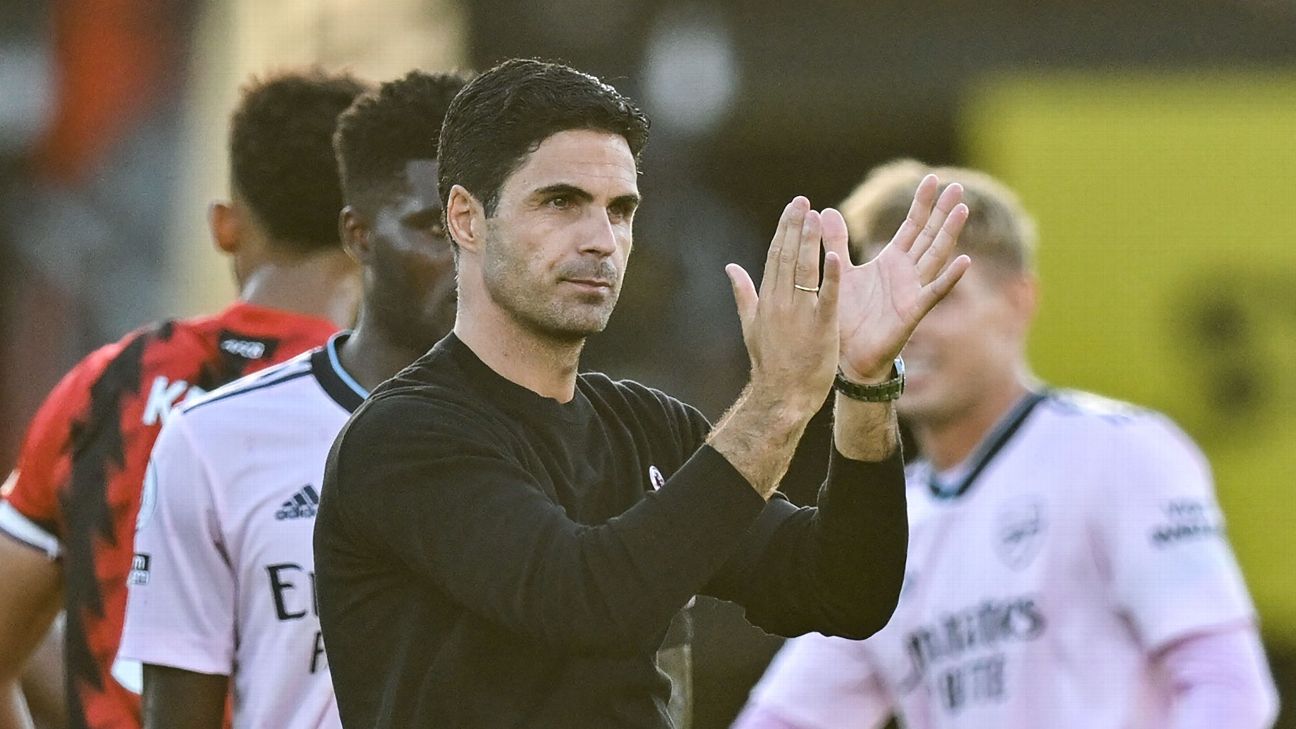 BOURNEMOUTH, England — Martin Odegaard scored twice and William Saliba found the net with a brilliant effort as Mikel Arteta’s Gunners won their third straight game to open the 2022-23 season. The 3-0 win vaults them to the top of the Premier League with their first perfect three-game opening to the season since 2004-05.

Here is our reaction to Saturday’s Premier League clash on the south coast.

1. Arsenal go from rock bottom to top of the league

Last year, Arsenal lost their first three games to sit bottom of the table with no goals and no points, triggering serious questions over Mikel Arteta’s management. A year on, they are top of the table on Saturday night after a resounding 3-0 win over Bournemouth that suggests Arteta has Arsenal in a place where they can seriously challenge for a top four spot.

The welcome contrasts are everywhere. Arteta’s first game in charge was against Bournemouth in December 2019, a 1-1 draw in which the Gunners scrambled to rescue a point. This time, they were 2-0 up on the south coast inside 11 minutes through Martin Odegaard’s brace, before William Saliba extended their lead nine minutes after half-time. Their dominance was total: Bournemouth had no touches in Arsenal box in the opening 45 minutes and ended with an xG of 0.29. The jubilant away support sang Arteta’s name and went through a repertoire which underlined the reconnection with their team – even Granit Xhaka, who was stripped of the captaincy less than three years ago, was among those serenaded.

Tougher tests are to come — Bournemouth will palpably struggle to stay up this season if reinforcements do not arrive before the window closes — but Arteta has the Gunners in a completely different place right now to the dark days of the past.

The record books will show Odegaard scored the opening goal here and Gabriel Martinelli assisted, but it was Gabriel Jesus‘ contribution that did the most to turn the match in Arsenal’s favour early on. Five minutes in, Jesus out-muscled Marcos Senesi before producing a superb first touch to help spin into space, evade Jefferson Lerma, ghost beyond Marcus Tavernier before slipping a reverse pass away from Chris Mepham to release Martinelli for a shot at goal.

Leaving aside the sublime quality of that passage of play, it was precisely the sort of defiant moment that sets the tone for the entire team. Past incarnations of Arsenal would start away matches like this with doubts over their hunger for the fight, allowing opponents to grow into the game as they sense an opportunity.

Arteta has already described witnessing the impact of Jesus’ winning mentality behind the scenes, and here was a manifestation of that on the pitch: he led from the front with tenacity and authority to help give Arsenal a lead they never once looked like relinquishing. These are still early days, but the upgrade from Jesus to Alexandre Lacazette looks stark on this evidence. In another sign of his growing influence, Jesus ended the game here as captain in only his third appearance for the club.

The Arsenal fans spent most of the first half debuting a new song for their £27 miillion centre-back — “Saliba” to the tune of The Champs’ “Tequila” — long before he curled home his first goal for the club with a superb left-footed finish nine minutes into the second half. The 21-year-old took Xhaka’s pass first-time inside the box, lifting a marvellous finish over Mark Travers to score his first Arsenal goal. Well, his first goal at the right end.

Last week, Saliba put through his own net in the Gunners’ 4-2 win over Leicester City, but he was supported through that difficult moment by a fanbase desperate to see him succeed after waiting three years to see him represent the club. As Saliba ran off to celebrate, Oleksandr Zinchenko simply sank to his knees, hands on head, overwhelmed by the majesty of it all.

Saliba’s composure is undeniably impressive for someone so young and he ended here with a perfect 100 percent pass completion rate: 75 out of 75. The hype around this promising young centre-back will only grow.